In 2003, Solar Cookers International (SCI) began a project called Sunny Solutions, which involved introducing and creating a market for solar cookers in four of the fourteen administrative areas of Nyakach, Kenya with 113,000, primarily of the Luo ethnicity. This community was selected from 150 applicants from all over Kenya. Near the equator and close to Lake Victoria, there is abundant and intense sunshine for over six months of the year. People are poor, there are few employment opportunities, agricultural and fishing resource bases are increasingly degraded, and wood and charcoal have become scarce and very expensive. The construction of a hydro-electric dam is attracting outsiders and bringing some hope of development, especially to those in Nyakach, despite the fact that many cannot afford to pay for electricity lines, let alone electric stoves. The Nyakach area has been ravaged by the AIDS pandemic and has poor roads due to decades of neglect by the Moi government. Eating habits in this area are ideal for solar cooking – most foods are boiled and meals are traditionally eaten at mid-day and in the early evening. A favorite local staple, omena (minnows), is considered most tasty when solar cooked. Sixteen trainees were selected in May 2003 from 16 women’s groups, with fifteen attending the training workshop in June 2003. Most remained and new ones added, with a total of twenty-three formally becoming solar cooker vendors in July 2005. 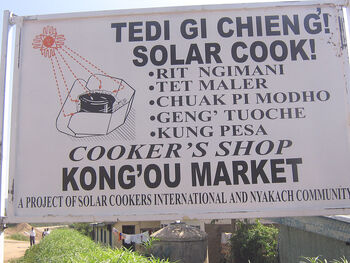 Practical Action carried out research on fuelwood use in Kadibo Division, which is a few kilometers from Kisumu, the third largest city in Kenya. Here too the population is primarily Luo, with many involved in the fishing industry or in informal trade in nearby Rabuor town and Kisumu. Despite its proximity to Lake Victoria, the area is virtually devoid of vegetation. Women resort to using Papyrus reeds as cooking fuel. The reeds generate a lot of smoke and must be carefully attended to. Practical Action provided information on smoke reducing strategies including solar cookers to villages in Kadibo and nearby divisions. Solar Cookers International has met with local leaders who are eager to address the area’s fuelwood crisis. We are presently gathering preliminary information on fuelwood use, socio-economic conditions and public health in North Nyamware sub-location (pop. 5000), one of three Kadibo sub-locations. Eight SCOREPS were recruited in October/November 2006 and trained in December 2006. 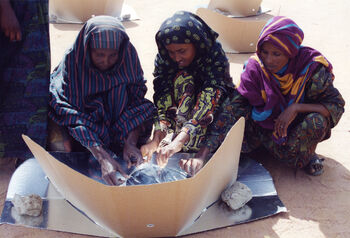 A Peace Corps volunteer in Kajiado learned about solar cookers and contacted our office for assistance with introducing solar cookers to his students and the community. Waterborne diseases and indoor air pollution from cooking fires are important health issue for the local Maasai people. Practical Action notes that average smoke levels in Kajiado area kitchens were recorded at over 100 times the accepted international standards. Water collection is laborious involving distances of 10-15 kilometers. This American volunteer was attached to the African Inland Church, which operates the schools, a hospital, a mobile clinic, a therapeutic center for polio victims and trains traditional birth attendants. SCI conducted initial solar cooker demonstrations at four sites in September 2005 and established a presence in Kajiado in 2006, with training of SCOREPS delayed until January 2007 due to heavy rains. 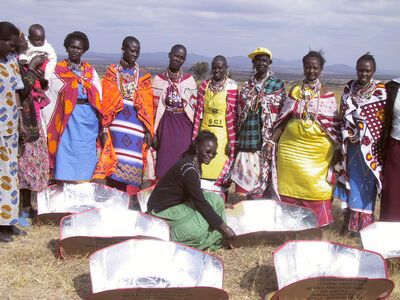 An evaluation of the Sunny Solutions project is forthcoming, perhaps in late 2007. [1]

Retrieved from "https://solarcooking.fandom.com/wiki/Sunny_Solutions?oldid=122493"
Community content is available under CC-BY-SA unless otherwise noted.