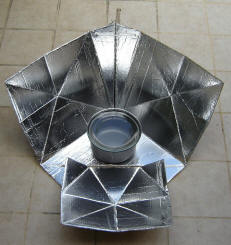 The Suntastic Panel Cooker is the result of my (Teong Tan's) effort in creating a simple solar cooker, which is capable of cooking without a greenhouse enclosure. Such a cooker would allow people, having no access to suitable greenhouse enclosure material, to solar cook as long as they have good continuous sunshine.

The 48cm tall 'Suntastic' panel cooker, which I have originally constructed, is capable of raising the internal temperature of an empty, 4-liter black metal pot, with a clear glass lid, to 150° C in about 30 minutes. If a greenhouse enclosure is used, the temperature can reach about 180° C. 2 cups of rice can be cooked, without a greenhouse enclosure, in about 100 minutes, and 3 liters of water heated from 26° C to pasteurization point, 70° C, in about 50 minutes.

The 'Suntastic' panel cooker is made from a used, cube-shaped, cardboard box. The width of the box should be about twice the diameter of the pot. Other materials required are one short cord, paper tape, aluminum foil and glue.

Start by cutting the cardboard box to obtain four panels as shown in Figure 1. Draw fold and cut lines, as indicated in Figure 1, and then cut and fold the four panels accordingly. 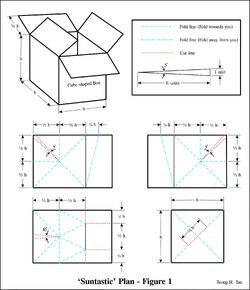 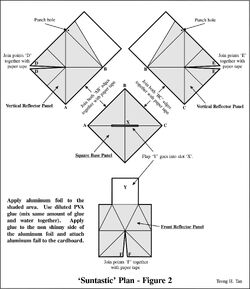 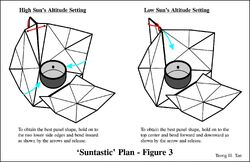 For best panel shape, gently bend and release the two vertical reflector panels, according to instructions in Figure 3, whenever the cooker is reconfigured. Install the independent front reflector panel by inserting its flap into the square base panel's slot. Whenever the independent front reflector panel is removed, the triangular front of the square base panel can be used as a reflector; but the cooker will be less efficient this way, and a greenhouse enclosure is required. To prevent the two vertical panels from swaying in the wind, place two heavy objects up against the back face of the two vertical panels as shown in Figure 4. 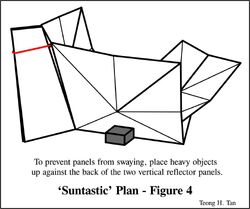 To cook, put foods inside a black metal pot and cover it with a clear glass lid. Black metal lid works too, but a clear glass plate works better when the inside of the pot is dark in color. A pot with taller sidewall works better than a shallow one because of additional surface to capture sunlight. Do use a greenhouse enclosure, if it is available, for higher temperature cooking. Set cooker up according to the sun's altitude, and face it towards the sun. Place pot on top of the cooker base. Shift the pot towards the rear of the cooker when cooking with low sun's altitude setting, and towards the front with high sun's altitude setting. Shape and tilt the front reflector panel to obtain the most reflected sunlight onto the front face of the cooking pot, and hold it in position by wedging something below it. When not in use, the 'Suntastic' panel cooker can be folded up by first removing the front reflector panel. Next lift the cord loop off the rear vertical edge, and then fold the square cooker base upward, see Figure 5, to allow for the two vertical reflector panels to collapse inward.

'Suntastic' panel cooker is made using simple and widely available materials, so that it can be easily duplicated elsewhere. It is my hope that as the material required for panel type solar cooker becomes simpler; more people will be able to benefit from making and using their own panel solar cookers.