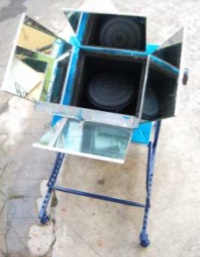 The Suspended Box Solar Oven is the invention of Sankha Subhra Datta, an engineer located in West Bengal, India at the Jalpaiguri Akshay Rural Technology and Renewable Energy Entrepreneurship Development Centre. This solar box cooker design is intended to address the problem of the ever changing orientation to the sun while cooking. It is suspended at two points within a support frame, allowing for rotation of the entire cooker around a horizontal axis from 5 to 70 degrees with respect to the ground. The cooker can therefore maintain a nearly 90-degree angle to the light as the sun's position in the sky changes. The cooker is rotated around a horizontal axis by repositioning a bar that is attached to the lower front corners of the box between any of 14 slots spread across the base of the frame. Datta says this system has advantages over solar box cookers with tilt-adjusting rear legs — a greater range of rotation can be achieved, and the cook can rotate the unit smoothly without having to lift its entire weight and risk food spillage.

Another design feature that helps to prevent food spills is the weighted, rotating cooking tray that keeps the pot horizontal at all times. Regardless of cooker rotation, the pot is always at the center of the cooker because the tray rotates on the horizontal axis of the pot. "This tray holding arrangement is designed for proper utilization of top and bottom reflectors at every inclination … which is not possible in simply suspended tray arrangements [because] shifting of pot location from the central position of the inner box due to the rotation of pot around pivots," Datta says.

The cooker frame sits on casters for easy rotation around the vertical axis. The outer box is constructed of galvanized iron and the inner box is aluminum, with glass wool insulation in between. The glazing is double-paned glass with a two- centimeter air gap.