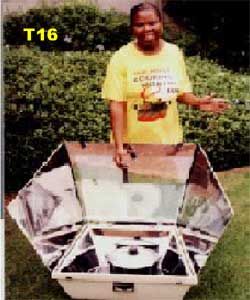 The T16 cooker is a proposal from SYNOPSIS, a research group with several projects about solar boiling at world scale. Its predecessor, the REM5, is a solar cooker box with a cover of single pane glass, aluminium frame and a policarbonate box, with three exterior reflectors. This model has been developed to be used and fabricated during cooperation projects in developing countries. Because its fabrication required patience and habilities with tools, they developed the T16, a version easier to reproduce. The maximum temperature reached by the T16 is 147 °C (297 °F) in frying oil after 130 minutes.

Retrieved from "https://solarcooking.fandom.com/wiki/T16_cooker?oldid=100781"
Community content is available under CC-BY-SA unless otherwise noted.