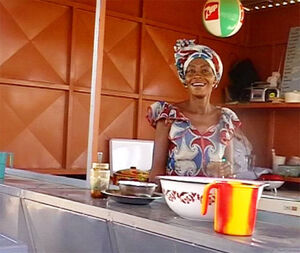 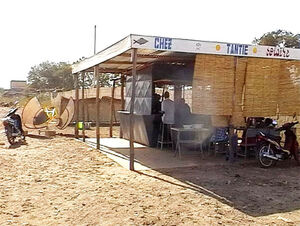 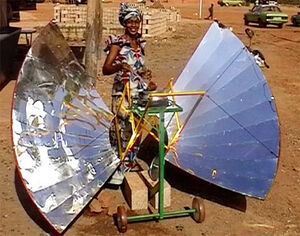 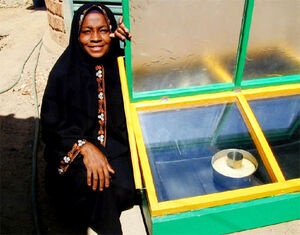 Update: Christoph Müller reports in January 2015 that this restaurant is no longer active, but there are plans to move it to Bobo, Burkina Faso

The first solar kiosk is in operation in the capital Ouagadougou of Burkina Faso. Significantly, it has the name Chez Tantie Solaire (The Solar-aunt). Equipped with a locally produced-Papillon solar stove and a box cooker the customers' meals are cooked with solar energy. The owner and excellent cook, Mariam Kone (41), manages the kiosk, making a living for herself and three children.

Miriam lost her husband a few years ago in a traffic accident. Afterwards Mariam lived in the street and couldn't even send her children to school. Now she has an independent life. Meanwhile, her oldest daughter Amsetu is back in school. The two other siblings do their lessons and help evenings at the kiosk.

The kiosk stands on the western outskirts of Ouagadougou (Pissi). Due to the secluded location of the property, rent is 5,000 CFA (~ 8 Euro). This disadvantage is offset by the adjacent cinema, and elementary and high school. The widely visible solar cookers are viewed by passers-by and students with considerable interest and attract a crowd.

Mariam fries fritters (beignets) in the morning sunshine for the students of the adjacent schools. Furthermore, there is a daily soup and simple dishes such as rice with sauce, noodles and Tô on the menu. She also has a futuristic-looking box cooker for cooking bananas and Njam root.

She suppliments whene needed with a gas stove to keep pace. The box cooker also allows Mariam to bake cakes. Due to their tight finances, Mariam uses the solar cooker regularly. She would have otherwise a monthly cost of firewood up to 15,000 CFA (23 euros) to pay. This corresponds to the half a school year for one of her children. Only in the rainy season, when the sunshine is so unreliable, does the cooker remain mostly in the house.

She was set up with her solar kiosk cook by a generous donation from a German foundation and from private donations from Germany. It is hoped that the daily presence of this new technology will cause many others to copy her.

Retrieved from "https://solarcooking.fandom.com/wiki/Tantie_Solaire?oldid=80459"
Community content is available under CC-BY-SA unless otherwise noted.