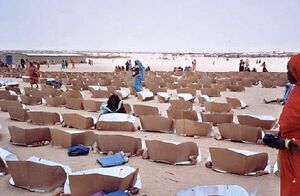 TchadSolaire is working with Cord, the KoZon Foundation, Jewish World Watch, and Stichting Vluchteling on a large solar cooking project at the Iridimi Refugee Camp and the Touloum Refugee Camp in Chad. The project is located in a near-desert area where fuelwood for cooking is extremely scarce, searching at long distances outide the camps is very time consuming and potentially very dangerous. The World Food Programme distributes food, as a function of what it receives from donors, mostly maize meal, dried beans or lentils, a bit of salt and one liter of oil per person per month.

The solar cooking project is based on a strategy of "integrated household energy". This strategy is based on the use of an improved woodstove for preparing breakfast, the use of the solar cooker (adapted for use in the very windy near-desert areas) for lunch, and the use of the solar cooker with a "haybasket" to keep food warm for the evening. In this area solar cooking is possible for about 330 days per year, it rarely rains and the main hindrance are the duststorms in December-January. The fuelwood requirement has been reduced to less than 1/4 of what was required earlier. In a recent evaluation it was found that trips for searching wood have been reduced by 86%. Coordinator Dr. Derk Rijks reports 14,000 solar cookers have been distributed as of mid-2009.

Articles in the MediaEdit

Retrieved from "https://solarcooking.fandom.com/wiki/TchadSolaire?oldid=108386"
Community content is available under CC-BY-SA unless otherwise noted.