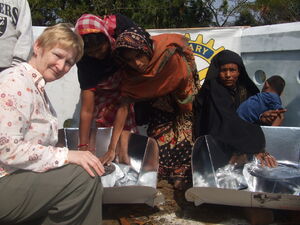 From England, we run a clinic in a remote village in north-east Bangladesh, see: http://www.thewearsurmaclinic.com/

Over the past year, we have become conscious of the very real problem that villagers have sourcing firewood. All my investigations indicate that little (or nothing) has been done to promote Solar Cooking in Bangladesh. We are just a tiny outfit, operating our Clinic on less than US$10.000 a year.

We are, ourselves, convinced that the ovens are very efficient. Despite the fact that England is not, by any stretch of the imagination, a sun rich country, I have cooked a tasty chicken my garden in northern England in about 18c of sun and in less than 3 hours with a simple Cookit!! I believe that I am the first person in England to cook a meal in a solar panel cooker.

The British Government (and all our Media) is trumpeting about the concern over environmental issues and the need to constantly investigate new "Green" projects.

We are going to Bangladesh in July 2007 and will take some Cookits with us to try and demonstrate them in the village. Unfortunately, this will be the Monsoon season, not the best time of year to demonstrate Solar Cooking! 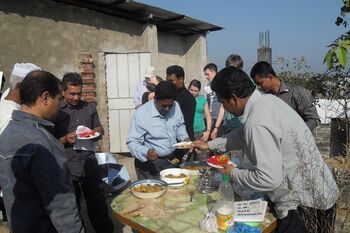 Retrieved from "https://solarcooking.fandom.com/wiki/Terry_Elliott?oldid=77373"
Community content is available under CC-BY-SA unless otherwise noted.