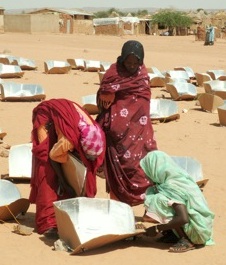 The Touloum Refugee Camp, located in Chad on the Sudanese border, houses more than 23,441 Darfur refugees (2009), mainly women and children. After setting up a large solar cooking project in the Iridimi Refugee Camp in Chad for Darfur refugees, the KoZon Foundation, Tchad Solaire, Jewish World Watch, and Solar Cookers International constructed a manufacturing plant and storeroom in the camp in March 2007. Roughly 5,000 women were trained to use the solar cookers, and 16,000 cookers were distributed. (See also November 2009 report from onsite visit to the Touloum Refugee Camp.) Replacement cookers were provided for the families, which are made up of 5-7 people per tent, often one woman as the head of household, with up to three of her own children and three orphans.

In early 2005, solar cooking was introduced to Darfur refugees living in the Iridimi Refugee Camp in Chad by Dr. Derk Rijks of the KoZon Foundation. Jewish World Watch’s Solar Cooker Project (SCP) adopted this endeavor in 2006 and expanded it to provide solar cookers and training to three refugee camps.

The area is devoid of vegetation and receives very little rainfall—between 3” and 5” (7.5 - 12.5 cm) annually; though there is abundant sunlight.

The main food distributed is maize meal, and it is sometimes accompanied by a maize-soya-meal mixture, if available. The pulse plants most frequently distributed are yellow and red lentils, white and red beans, and sometimes pigeon peas. These require cooking for about three hours, depending on the clarity of the sky. The heat from solar cookers is slow and gentle, so while the food stays longer in the pot, it does not stick to the walls or need to be regularly stirred, which is an advantage over the potential to burn food with fire. This also provides women the opportunity to do other things while the food is cooking, such as pursuing economic and education opportunities.

Additionally, there is not the lingering smoke as there is with a fire, which reduces the incidence of respiratory illness and eye infections. Solar cookers are also able to be used to pasteurize drinking water, reducing incidence of water-borne diseases, especially in children.

The SCP’s partners have included Solar Cookers International, which has provided technical assistance, the United Nations High Commissioner for Refugees (UNHCR) which manages the camps and coordinates NGO activities, and Tchad Solaire ("Solar Chad"), the NGO that previously operated the SCP on the ground in Chad.

Organizations providing financial support for this project have included: Netherlands Refugee Foundation, Jewish World Watch, as the North American Coordinator of the Project, the Darfur Assistance Project, the Dora Levit Family Fund, and the Hesed Fund. Additionally, logistical and communications support from the UNHCR and CARE was invaluable to project operations.

The Benefits of Solar Cooking[]