David Williams from Canada calculated that the size of the ideal parabolic dish for solar cookers on equatorial mount would have a depth 1.85 times the focal length. This was confirmed by Robert Israel, Department of Mathematics, University of British Columbia. (See Focus-Balanced Paraboloidal Reflector.) At that size, assuming uniform material, the center of gravity will lie on the focus. David Williams proposes using this dish "as is" I propose at least cutting it in half. We shall see! There follows a photo of the prototype. It is inclined at 48 degrees to the north so that it will work at my latitude. At your latitude you incline it at your latitude degrees.

The next video shows the half made Mark II tracking accumulator. I try to make it as low tech as possible.

The following video is a model of the accumulator with 2 dishes counterbalancing each other. This would work in the tropics but may cause difficulty as you go further north or south. 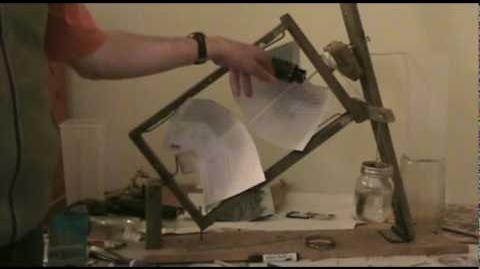 The tracking solar accumulator design now has everything it needs, good tracking, balance, and it is on equatorial mount which is the same all over the world. (Just the angle of the axis it turns on changes with the latitude)

Where my previous design had problems with seasonal adjustment, (the center of gravity moved off the axis making it more difficult to turn) the new design uses 2 parabolic dishes! and 2 heated areas! to counteract that problem. Now as one dish goes makes the center of gravity go high with the change of seasons, the other one exactly counteracts it in the opposite direction.

There follows the previous steps in the progress towards the goal:

I, Brian White, made my first solar cooker in early October 2006 when I was laid up after surgery. It was a Steven Jones Funnel Cooker. Good but the limits soon became clear.

There has been quite a lot of change since then. In the summer,I started up a blind alley where I thought you could make a curved horn shaped funnel to concentrate the light to the tip of the horn. A little math showed that this does not happen. Finally I was turned to parabolic concentrators and was turned away again by the math! (And I was good at math, quite a bit above average, I coached girls in my class, etc).

No, math has no place in life. Just kidding!

The way to go seems to be parabolic dishes.

And so I went along and invented the Mechanical Mathematician, a completely non-math way to make a parabolic dish!

If you look on the internet, you will see lots of dishes. Even the cardboard Panel Cookers are basically parabolic.

But most of the stuff, it seems is being designed for machines not for people. Everywhere you see people hunkering down around panel cookers on the ground or stretching across a 4 or 5ft wide "satellite dish" to reach their food to turn it or see if it is cooked. None of these seem to be even HALF comfortable ways to cook!

A handful of designs allow you to cook on a table. This is the way I want to go with the barbecue. Why not a barbie? Solar powered? That should be as relaxed as you can get! And if you could get big companies and the Americans and Australians to try it, before long others would follow. So here are some constraints. The reflective dish must be mounted on an equatorial mount. That just means on an axis parallel to the earth's axis. Just point your axis at the nearest geographic pole and elevate it to whatever your latitude is! The focus must be on that axis too.

Here is my initial design for simple tracking on an equatorial mount. I have a diagram to show how things work. The design should also work just fine with a small stepper motor controlling the water level. It should also work good for aiming solar panels at the sun.