See also: Global Calendar of Events and past events in USA 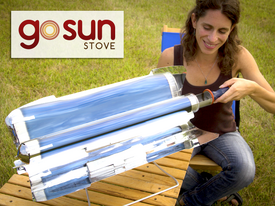 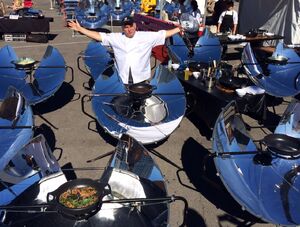 Some of the many solar cooking non-governmental organizations based in the US are Solar Cookers International (SCI), Rotary International, the Solar Oven Society, and Solar Household Energy, Inc.

No precise numbers are available, but estimates suggest that perhaps as many as 10,000 Americans use solar cookers regularly. The electrical utility of the Sacramento, CA area, the Sacramento Municipal Utility District (SMUD), has been a strong supporter of solar energy usage. SMUD serves an area of more than a million people. Under earlier leadership, it pioneered the development of cleaner electricity generation, including building the first solar-powered generating station in the United States. It has offered rebates for replacing old appliances with energy-efficient equipment, and it cooperated in planting trees to lower the cost of air conditioning to consumers, as examples. For purposes of this report, it is important to note the strong support of SMUD for solar cooking education, including outreach to schools and community organizations. They have placed solar cookers with Scout troops, offered workshops in 65 schools of the area, and made available plans to build cookers to customers throughout their service area. In 1991, SMUD even produced a solar cooking cookbook. Reducing the use of electricity is in everyone's interest; this interesting example of a public utility's contribution to solar cooking as one contribution to solving the problem was noteworthy.

The late George Lof, a former director of the Industrial Research Institute at the University of Denver, Colorado, was an early pioneer of solar-powered technology, including solar cooking. In the fifties, he experimented with a parabolic solar cooker design that he dubbed the "Umbroiler" because of its umbrella-like structure. He marketed the design, but it was a commercial failure for the times.

Considerable activity can also be found in the state of Arizona, probably the sunniest of the U.S. fifty states. The most important solar cooking fact about Arizona is that the late Barbara Kerr, the foremost expert on solar cooking in the U.S., lived in a small community in this state. She created and lived in the Kerr-Cole Sustainable Living Center, which demonstrates a wide range of ways to live lightly, rather than destructively, on the earth. Barbara is the author of several books (The full text of one is here) and articles on solar cooking, the creator and marketer (with her colleague, Sherry Cole) of a cardboard box cooker, the refiner of the CooKit as the first inexpensive but efficient solar cooker, and a never-ending source of information to those who seek her knowledge on the internet. A visit to Taylor, Arizona, is a trip to an important piece of solar cooking history.

Solar devices are also manufactured in this area. Early pioneers, the late Bob Larson and his wife Heather Larson, produced cookbooks and plans for solar dryers until their untimely deaths. Jay Campbell, a New Mexican engineer, has invented a range of cooking devices that won prizes for ingenuity and efficiency, though he is not a manufacturer but rather an idea person. One firm, Zone Works, makes and sells parabolics out of Albuquerque, NM.

Unlikely as it may sound, the state of Minnesota has also made contributions to the development of solar cooking. Mike and Martha Port, founders of the Solar Oven Society, have worked in a variety of Central American and Caribbean nations on various projects. Recently, they completed research and development of a new cooker, manufactured from recycled soda bottles; the device will help to fill the gap between the very inexpensive (but not so long lasting) CooKit and the more expensive box or parabolic cookers. With the assistance of a small business development grant from the State of Minnesota, charitable contributions from a range of churches and organizations, and the dedicated volunteer labor of the Ports over many years, they have recently been able to begin the sale and marketing, both in the U.S. and abroad, of the Sport. A collectivity of Minnesota churches made possible the shipment of 400 unassembled cookers to Afghanistan for sale at a subsidized price to people whose need for cooking energy is great.

The Nevada Solar Cookers Association was formed to share recipes, ideas, and stories and to spread the news about solar cooking in their area. Solar Cooker Review, March 2003.

The Sacramento, California NGO Solar Cookers International, the sponsor of this Wiki, has worked since 1989 to promote solar cooking around the world.

The entities listed below are either based in USA, or have established solar cooking projects there:

Retrieved from "https://solarcooking.fandom.com/wiki/USA?oldid=118596"
Community content is available under CC-BY-SA unless otherwise noted.