Natalia Blackburn of Blackburn Engineering has conducted a survey to determine how solar cooking usage may be able to reduce traditional consumer energy demand in the USA. When the big picture is considered, Natalia believes that wide use of solar cookers can add up to substantial savings for U.S. communities.

The main objective of the survey was to aid that mainstreaming process which has proven helpful with other “now emerged” technologies. One part of this objective was to develop a set of protocols to measure energy savings attributable to the use of solar cookers in U.S. households. Another part of this objective was to collect basic cooking and demographic data from solar cooker households:

Some noteworthy trends were observed:

See below under News and Developments for links to the full papers. 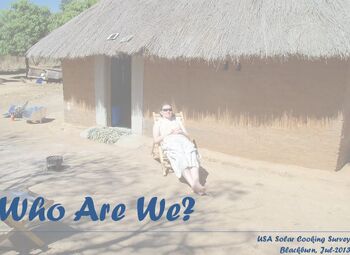 I solar cook more when camping than at home. -Sacramento County, CA

I have used a solar oven almost exclusively since 1982. -Pima County, AZ

Although I typically only solar cook on weekends I utilize all of my cookers and store the food in containers to be heated for dinner that week. -Sacramento County, CA

We really use our cookers a lot and consider 9 months to be pretty good. We also cook in the winter…It is a definite fuel savings. In the winter or on partially cloudy days we often use a hybrid method of bringing (e.g. beans) to a boil and then leave them in the solar cooker for hours to simmer. -Delta County, CO

I have been solar cooking for many years & have a lot of experience teaching / training others to use them as well ~ I STILL don’t use any of my cookers on a regular basis here in the US…I always say I will, but just don’t. As a novelty on a sunny day, I love to show off what they can do, but the sun is not reliable enough in SF to use on a regular / reliable basis. -San Francisco, CA

My sense is that our household saves [only a] little in natural gas and electricity costs by solar cooking (especially since we make very little use of air conditioning). I think our savings are more in the area of purchasing lower cost food items, like bags of flour to bake with, instead of prepared loaves of bread. -St Louis, MO

I do lots of haybox cooking. My solar oven was damaged (melted + mis-shapened) when cooking on a 113°day… -Oklahoma County, OK

With a good sky, you can do a lot in six months of the year, and I have successfully solar cooked some foods in January, with ambient temperatures in the 20s (F) and snow on the ground. -Latah County, ID

*And by the way, Solar Cookers International, Solar Household Energy, Inc., and the Solar Cooker Project (Jewish World Watch) have all sent their thanks.

**Question B-3: “It has been suggested that in [location where respondent lives] there are [#] “pretty good” months for solar cooking…How many days per week during those months did someone in your household use a solar cooker?”

To enlarge map and scroll

September 2014: A pilot study monitoring and verifying the energy usage/demand impact of cooking appliances in solar cooking households is currently being undertaken.

July 2014: Characteristics of Solar Cooking Households in the U.S.: Comparison with the U.S. RECS Survey was presented as a part of the SCInet Solar Cooking Convention 2014. This paper presents tabulations and graphs of the data collected from the solar cooking households that were part of the survey including comparisons to typical U.S. households. The paper is geared towards those familiar with solar cooking. Conference presentation video is found here

July 2014: Quantifying Energy Savings of Thermal Solar Cookers in U.S. Households was presented as a part of the American Solar Energy Society's SOLAR 2014 conference. This paper presents results of the survey going into detail of how the energy savings potential of solar cooking were derived. The paper is geared towards those familiar with energy conservation ideas but new to solar cooking.

October 2012 - April 2013: Surveys were conducted with a fifteen-minute phone interview, or the group of twenty-five questions were answered by email. Over 90 people from all over the US were survey respondents. Thank you to all of you who were respondents.

Retrieved from "https://solarcooking.fandom.com/wiki/USA_Solar_Survey?oldid=121913"
Community content is available under CC-BY-SA unless otherwise noted.