Edit
The article below is about a solar cooking promoter who is now deceased. This information is maintained here as a tribute to the important work done by Ulrich Öhler. 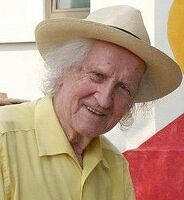 Öhler enjoyed a long, successful career in industrial engineering and design before moving with his wife Lisel in 1974 to Botswana, where they served as development aides. Öhler, believing that technical accomplishments would have no meaning if the earth was destroyed, sought to work for a better world environment.

In Botswana, a Canadian teacher named Richard Carothers introduced solar energy applications to the Öhlers. They tried promoting solar cooking in Botswana, but were met with skepticism from Botswanans who asked whether solar cookers were used in Switzerland.

In 1980, the Öhlers returned to Switzerland where they built their first solar cooker. By 1984, Öhler had developed a design for a sturdy, effective box cooker that was adaptable to a variety of materials and common hand-crafting skills. He also founded a group that would eventually take its name from the initials of Ulrich and Lisel Öhler. ULOG developed a variety of box cooker designs and a solar food dryer, and also promoted German SK-14 parabolic-type cookers and Scheffler Community Kitchens.

Öhler was as much a great collaborator as a greater designer. Many of the people he inspired and has partnered with are among the leading names of today’s solar cooker movement, such as Wolfgang Scheffler, Michael Götz, and Christine Lippold. Organizations such as Globosol, Solare Bruecke, Solar Energy for West Africa, VER-Solaire and others are closely associated with ULOG and many others have felt its influence.

Kawesa Mukasa of Uganda was a graduate student in Switzerland in the early 1990s when Öhler introduced him to solar cooking. Mukasa now heads the Solar Connect Association, one of the leading solar cooker organizations in Africa. Jean-Claude Pulfer, once a protégé of Öhler, now works in Paraguay where he is a partner in one of the most successful solar cooker programs in South America.

With so many people following in his footsteps, the impact of Öhler's work will not only live on, it will grow far, far greater in years to come.