Solar Cooking
Register
Don't have an account?
Sign In
in: NGOs, Manufacturers and vendors, Netherlands,
and 4 more 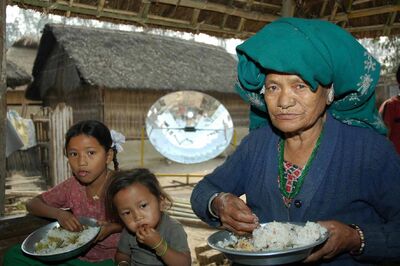 The Vajra Foundation (Stichting Vajra in Dutch) is a non-governmental, non-profit making, non-political, non-religious and non-sectoral social organization established in 1998. Its vision is to help improve the education, health and socio-economical conditions of the villagers and to enable them to become independent and self-reliant.

The Vajra Foundation has worked in the Bhutanese refugee camps in Nepal since the mid-1990s bringing solar cooking and heat-retention cooking to the refugees there. By 2013 some 85,000 refugees were cooking their meals using these methods. The on-the-ground work is done by Vajra Foundation Nepal and financing is provided by the Dutch Lottery and the Dutch NGO Stichting Vluchteling. Beginning in 2009, the project is slowly being phased-out. Vajra Foundation Nepal collects solar ovens of departing refugee families, repairs them and distributes them among the last refugees who are not yet in possession of a solar cooker.

During the last few years Vajra Foundation Nepal has continued in other solar cooking endeavors including the Vajra Academy and the Vajra Eco Resort which include large scale kitchens using solar heated steam for cooking (reported in 2016).

Cooking fuel shortages led to rising deforestation in the areas around the camps. The United Nations High Commissioner for Refugees (UNHCR) provided cooking kerosene to the refugees, helping to discourage the collection of firewood. But as kerosene prices rose, its delivery became uncertain. Each year, kerosene claimed a larger portion of UNHCR’s shrinking budget. Alternatives to cooking with kerosene had to be found. The Vajra Foundation Nepal worked tirelessly to promote an alternative: solar energy.

In 1996, biologist Maarten Olthof launched a few small-scale solar box cooker projects in Nepalese villages. After initial enthusiasm among the local users, the cookers were neglected.

Looking for advice, Olthof attended the third international conference on solar cookers, held the following year in Coimbatore, India. Ramkaji Paudel, a Nepalese citizen, accompanied him. With advice from former Solar Cookers International Executive Director Bev Blum, as well as other conference participants, Olthof and Paudel drafted a plan to teach solar cooking to Bhutanese refugees living in Nepal and formed the Vajra Foundation in the Netherlands.

In 1998, the Foundation received funds from the Dutch Refugee Foundation for a pilot refugee project. Vajra Foundation Nepal (VFN) was established to monitor the activities locally, and several Nepalese engineers were selected to teach the refugees to build solar box cookers. Two hundred thirty-four box-type solar cookers and 14 parabolic-type solar cookers were distributed in Beldangi-I, one of the seven Bhutanese refugee camps in southeastern Nepal. To receive a solar cooker, refugees had to pay a symbolic fee and sign a use and maintenance agreement.

By 1999 Vajra Foundation had determined that the box-type solar cookers they were promoting were not holding up well — hinges were rusting, reflectors and glazing were breaking. Other solar cookers were tried, including cardboard CooKits and solar cookers made of earthen materials, but they were also vulnerable to damage and not as efficient as hoped. In the end, EG-Solar’s SK14 parabolic-type solar cookers proved to be a good combination of durability and efficiency, and a good match for traditional Bhutanese foods.

Parabolic cookers are generally more expensive, but their efficiency allows for sharing among families, which lowers the per-family cost somewhat. Though the reflectors were imported from Germany, the stands were manufactured locally, also helping to keep costs down.

The cookers proved popular, and demand quickly outgrew supply. Families that didn’t use their cookers, or didn’t maintain them according to signed user agreements, had to return their cookers to Vajra Foundation to be redistributed.

While exploring ways to expand the project, VFN worked on an awareness creation campaign that included regular solar cooker demonstrations and lunches for refugees, government officials, and nongovernmental organizations (NGOs) including UNHCR, Lutheran World Federation, Oxfam, and the Nepal Red Cross Society. Continued solar cooker use was encouraged through participation in cooking groups, as well as contests. 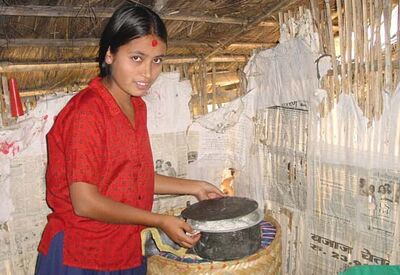 To keep food warm after sundown, when evening meals are commonly eaten, VFN introduced insulated heat-retention cookers (aka hay boxes) in which pots of food can be stored. These devices not only keep food warm for up to eight hours, but can also be used to continue the cooking process after pots have been removed from the heat source. 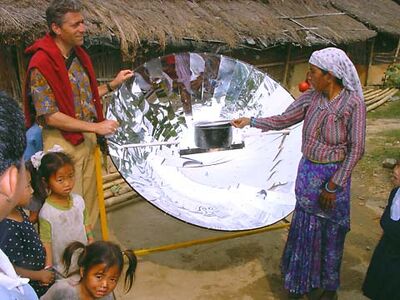 From 2001 to 2003 several hundred solar cookers, hay boxes and black painted pots were distributed, covering the main sectors of Beldangi-I camp. EG-Solar provided some of the cooker materials free of charge.

Napalese locals began to take more interest in the project, as did UNHCR officials, and Vajra Foundation won awards in both Nepal and the Netherlands. This recognition paved the way for a future donation from the Dutch Refugee Foundation. During this period improvements were made in the training procedures for new solar cooks and refugee supervisors.

Three hundred SK14s and twice as many hay boxes were distributed in 2004. By the end of 2005 about 12,000 refugees were benefiting from the solar cookers.

In eastern Nepal, UNHCR began to consider supporting the project to help offset the rising cost of kerosene and their own shrinking budget. Two Dutch students from Utrecht University surveyed 100 refugees about their solar cooker, kerosene and firewood usage, and found that solar cookers could save 3.14 kilograms of CO2 per meal compared to cooking with firewood, and 0.64 kilograms compared to kerosene. (Average firewood usage was 2.25 kilograms per meal.) Solar cookers could be used for approximately seven months each year in the camp, and their purchase cost could be recouped in kerosene savings in just over two years.

In 2006 both UNHCR and the Dutch Refugee Foundation asked Vajra Foundation to submit a proposal to expand the solar cooker program to the other six Bhutanese refugee camps in the area. Ultimately, the Dutch Postcode Lottery and the Dutch Refugee Foundation provided nearly $1 million for the program, enough to disseminate 6,300 solar cookers and 12,000 hay boxes to families in the camps as well as provide extensive use and maintenance training. (Each cooker was e shared by two families.)

Project leaders Maarten Olthof from the Netherlands, and Dor Bahadur Bhandari and Ramkaji Paudel from Nepal, estimate that 100,000 refugees benefited from the solar cookers by 2008. A new parabolic solar cooker from the German company Sun and Ice was also used to meet this large demand. The cooker — called the “LongLife Premium 14” — uses less material and simpler construction equipment than the SK14.

In October 2013, the Vajra Foundation Nepal reported that recently approximately one third of the Bhutanese refugees had left the camps and found new homes in the USA, Australia, New Zealand, and the European Union. They have left their solar cookers behind, thus freeing these up to be made available to the Nepali families who live around the camps. Devi Maya Kadariya, a resident of the village of Garamani, reports that she and her neighbors had seen the profile of the solar cookers in the distance and they knew that the refugees were able to cook with the sun. She now considers herself lucky to have a solar cooker for herself. She says she saves a lot of wood and especially saves the time that she used to spend gathering wood, and she feels that her life is better now.

Vajra Foundation considers five factors as having been essential to its successes: 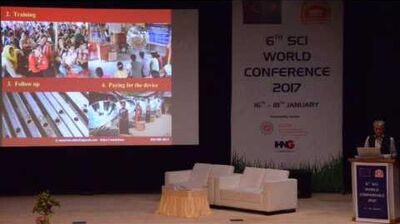