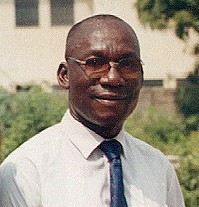 Solar Engineer Vincent Nnanna is the pioneer solar cooker advocate in Benin Republic. He has conducted a series of workshops teaching youth and educational institutions how to make their own solar cookers. He has conducted workshops with selected science students of the Nigerian International Schools, Cotonou in conjunction with students of Laurel International Schools with facilities provided by the Chinese Cultural Centre, Cotonou. He has worked with Canadian Youths (sans frontiers) to do a successful workshop at Bohicon near Cotonou with Ed Carswel. He has also held some solar-talk shop with members of the English Language club at the American Cultural Centre, Cotonou. His most recent outing was a workshop at Vogan, some 60 kilometers from Lome, the Togolese capital. The workshop was hosted by Jeunes Volontaires pour l’Environnement in collaboration with the Ministries of Health, Energy and Environment of the republic of Togo. Vincent has built over 350 solar boxes, CooKits and parabolic ovens for distribution to the public.

Retrieved from "https://solarcooking.fandom.com/wiki/Vincent_Nnanna?oldid=114088"
Community content is available under CC-BY-SA unless otherwise noted.