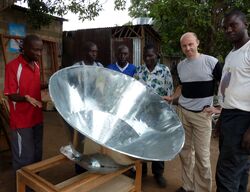 The Voukana Solar Cooker is based on the patented Kolamba Solar Cooker (Norway Patent 20101479). The Voukana Solar Cooker is an inclined double funnel community solar cooker and is made locally in Brazzaville in the Republic of Congo by the same team that made the Deep Double Funnel Cooker in 2009. We started out with paper models and already after second try; the result seemed to be quite satisfactory. Because of its size it is a typical community solar cooker, that can cook a lot of food during the day. It boils half a liter of water in 8 minutes. Water is also boiling hot when it is poored down into a thermos.

Preassure cooking is also possible. The video below shows the hot steam from the pressure cooker which is well above 120 °C (248 °F). This high temperature with steam pressure shortens cooking time with 50%, giving solar cooking a new flavor. You can cook all kinds of vegetables or meat without losing important vitamins and flavor to the water. 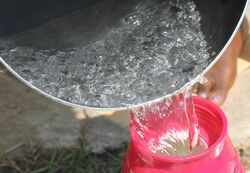 Water can be pasteurized using 10-liter PET bottles that can be found in any African village. Water temperature will reach about 70 °C (158 °F) in these transparent bottles and, together with concentrated UV radiation, this should be enough to pasteurize water. The technique needs to be confirmed with laboratory tests.

The Voukana Solar Cooker cooks from 0800 in the morning to 1600 in the afternoon in the equatorial zone. The idea is that the cooker is inclined 30 degrees from the zenith is operational within a 120 degree sector when adjusted azimuth during the day, and the only moving part on it is the pot.

Retrieved from "https://solarcooking.fandom.com/wiki/Voukana_Solar_Cooker?oldid=107586"
Community content is available under CC-BY-SA unless otherwise noted.