Contrary to common belief, biologically-contaminated water does not need to be boiled to make it safe to drink; it only needs to be brought to a temperature that is sufficient to kill all disease-causing organisms. This is known as water pasteurization. Because the pasteurization temperature is much lower than the boiling temperature, pasteurization results in significant fuel savings when compared to boiling.

The dangers of unsafe drinking water cannot be overstated. The World Health Organization estimates that there are roughly 1.7 billion cases of diarrheal disease annually, resulting in the death of nearly 760,000 children under the age of five every year, making it the second leading cause of death in this age group. [1] Yet, in many of the most severely affected regions, sunshine is an abundant source of energy that can not only cook food but can also heat water to temperatures that kill harmful microbes, making water safe to drink.

It has been known since the late 1880s, when Louis Pasteur conducted groundbreaking research on bacteria, that heat can kill pathogenic (disease-causing) microbes. Most people know contaminated water can be made safe by boiling. What is not well known is that contaminated water can be pasteurized at temperatures well below boiling, as can milk, which is commonly pasteurized at 71 °C (160 °F) for 15 seconds.[2] 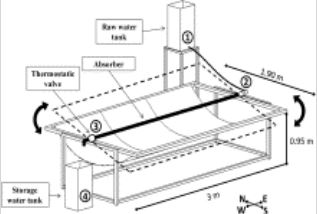 Solar cooks know how easy it is to heat foods in a solar cooker to temperatures well above 60 °C (140 °F). Knowing this, Dr. Bob Metcalf and a graduate student of his in the early 1980s, David Ciochetti, studied solar water pasteurization for the latter's master's thesis. They found that when contaminated water was heated in a black jar in a solar box cooker, both bacteria and rotaviruses -- the main cause of severe diarrhea in children -- were inactivated by 60 °C (140 °F)[2]. In the paper published this work (Applied and Environmental Microbiology, Vol. 47:223-228, 1984) it was concluded that if contaminated water were heated to 65 °C (149 °F), all pathogenic microbes would be inactivated. This includes the hepatitis A virus, which has a 90 percent reduction after two minutes at 60 °C (140 °F).

Since thermometers are not accessible to many people around the world, there is a need for a simple device that indicates when water has reached pasteurization temperatures. Fred Barrett, who was with the United States Department of Agriculture when Dr. Metcalf worked with him on a solar box cooker project in Sierra Leone in 1989, came up with the idea of using vegetable wax, with a melting point near 70 °C (158 °F), as an indicator. He built several models based on the idea of wax inside a plastic cylinder, and successfully used them to verify pasteurization conditions of contaminated water. In 1992, Dale Andreatta -- a Ph.D. candidate in mechanical engineering at the University of California, Berkeley at the time -- created the Water pasteurization indicator (WAPI) in its current form. The WAPI is a clear plastic tube partially filled with a soybean wax that melts at about 70°C (158°F). With the solid wax at the top end of the tube, the WAPI is placed in the bottom of a black container of water that is solar heated. If the wax melts and falls to the bottom of the tube, it ensures that water pasteurization conditions have been reached. The WAPI has a stainless steel washer around it to keep it at the bottom of the container, which is the coolest location when solar heating water. Since top water temperatures are often 2-5 °C (4-10 °C) hotter than bottom water temperatures, lower WAPI placement helps to further insure that pasteurization conditions have been achieved.

Retrieved from "https://solarcooking.fandom.com/wiki/Water_pasteurization?oldid=118303"
Community content is available under CC-BY-SA unless otherwise noted.