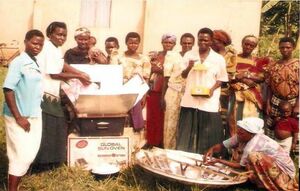 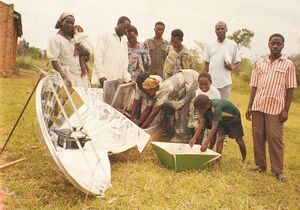 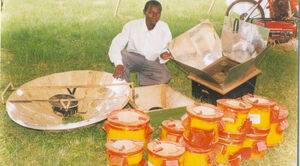 The Welfare Society for Solar Development (WSD), formerly Welfare Society for the Disabled People, has helped over 10,000 people in Uganda and over 1500 in Congo and 1500 in refugee camps to solar cook. Since January 2009 the organisation has distributed CooKits, Sun Ovens, and parabolic cookers to new member groups in the urban and rural regions of western Uganda, including the refugee camps (settlements) and taught over 2000 people. Demonstrations and training workshops, as well as advocacy efforts, including displays in various shows, have increased in number as our member base has grown. Per request from our members, we have introduced and integrated improved household energy-saving stoves, Rocket Stoves, and burners which do not produce smoke during cooking. Such stoves allow for a safer and more environmentally friendly method to cook indoors and during the rainy season. Our organization is currently in need of a laptop computer, low-cost aluminum foil, powder coated aluminum, and other materials.

Retrieved from "https://solarcooking.fandom.com/wiki/Welfare_Society_for_Solar_Development?oldid=126568"
Community content is available under CC-BY-SA unless otherwise noted.