Edit
watch 01:25
Jurassic World: Dominion Dominates Fandom Wikis - The Loop
Do you like this video?
Play Sound
The article below is about a solar cooking promoter who is now deceased. This information is maintained here as a tribute to the important work done by Wietske Jongbloed.

My name is Wietske Alma Jongbloed and I was born in Indonesia in 1932. I never minded getting old but these days I am sorry that I am not a couple of years younger to be able to work much longer for the advancement of solar cooking with all the inspiring solar friends I met in Varese, Kimberley, Nairobi, Nantes and Granada. You don’t find so many in the Netherlands because of the few really sunny hours.

My first solar cooker was a box model from Solar Cookers International, which we made in Niger in 1991 from the carton in which the fridge was packed, etc. We made several and gave a few away to Nigerians. But a box is often too cumbersome for the small houses (to stock) and also the glass plate broke easily and glass is expensive there. Also termites love carton, as well when box is made of wood.

Then the CooKit came along. Which we provide folded in a cotton bag that can be hanged on the rafters against those termites. Later in Holland we created a foundation called KoZon, which is a shortcut from the Dutch: “Koken met de Zon als warmtebron” meaning: “cooking with the energy of the sun”. We have a board of 5 persons and a couple of active advisers, we all are volunteers.

Our target countries are in the Sahel: Chad, Burkina Faso, Mali and Niger. As the CooKit is the cheapest solar cooker in Africa at the moment we think that it is the best way to learn women that solar cooking is possible. It is true that it is too small for the way food is cooked for the extended Sahelian families. But in combination with an improved stove and a large haybasket, large enough for the big pots, the CooKit is useful for many dishes which can be prepared when the sun is shining.

In the refugee camps in Chad, where our adviser Derk Rijks is the project manager, small groups of about 5 to 6 people live in the tents and there the women find the CooKit a wonderful tool as it diminishes substantially their need for firewood and as well it does the cooking nicely.

During the solar conference in Grenada one of the main questions was: why is solar cooking not accepted by so many persons who could so much benefit from it.

I think there are two reasons :

When for example you decide to spend money on a grater, to grate carrots or other vegetables, at least you can always use it when you need it. But to spend money on a solar cooker is hazardous as you can nòt always use it when you need it, breakfast, evening meal, rainy season, dust in the air . In fact I believe that this is the main reason why a person would hesitate to buy it, certainly if this person would not have much money to spend, even if (s)he thinks that it would be a fantastic tool.

It is always said or written that developing countries would so much benefit of solar cookers, especially the poor.

Years ago I read an article (but am still looking if I can find it again) about a solar cookers introduction in Lesotho (a little kingdom within South Africa) where a poor woman said: “Why do we have to work with solar cookers if the rich, who could easily buy them, are not interested”?

Margaret Owino mentioned in her presentation how in Kenya the mobile phone technology had taken everybody by storm, although they are not cheap. Here it is clear that the rich started it and that they are now used by the poorer people as well.

Agnes Klingshirn wrote in her conference article: “Addressing the more affluent urban and semi-urban population, who are looking for cheaper alternatives for the rising energy costs (electricity, L.P.G., kerosene, charcoal) and can afford to buy solar cookers, can demonstrate the value of the new technology well”.

That is why in Niger I am trying to convince some women who are working and get a salary to buy a HotPot (available from the Solar Household Energy, Inc. agent in Mali). If the richer people will solar cook, the poorer will follow sooner, even using a cheaper cooker like the CooKit. I am quite sure about that. 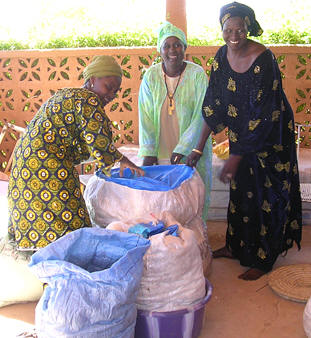