The Wilson Solar Grill is a conceptual solar cooker design (meaning only an idea for a design) developed by MIT professor Dr. David Wilson with the help of MIT graduate students from differing disciplines. The design was originally proposed in 2012.

This grill is designed to collect and store thermal energy from the sun to allow cooking times for up to twenty-five hours at temperatures above 230 °C (446 °F). The study was conducted by Derek Ham, Eric Uva, and Theodora Vardouli, all part of an entrepreneurship course called “iTeams.” I-Teams, (short for “Innovation Teams”) is a unique MIT course that assembles cross-disciplinary teams of students from across MIT. The goal of i-Teams is to teach students the process of science and technology commercialization focusing on how to judge a technology’s commercial potential. Each team has access to faculty, practitioners, business mentors, and fellow students throughout their project.

“There are a lot of solar cookers out there,” says Wilson, “but surprisingly not many using latent-heat storage as an attribute to cook the food.” Wilson’s technology uses a Fresnel lens to harness the sun’s energy to melt down a container of Lithium Nitrate. The Lithium Nitrate serves as a solar battery. Due to its phase change reaction, the thermal energy is able to be stored at longer periods of time and at higher temperatures. Heat is then redistributed through convection, which allows for outdoor cooking.

While the goal of creating a solar grill with the latent heat storage capacity they are projecting is fascinating, the grill is still a ways from becoming a production reality. This is probably also not a solution for subsidized solar cooking programs aimed at developing countries due to the likely high manufacturing expense. If the grill makes it to production, there may well be a substantial market in more developed countries. 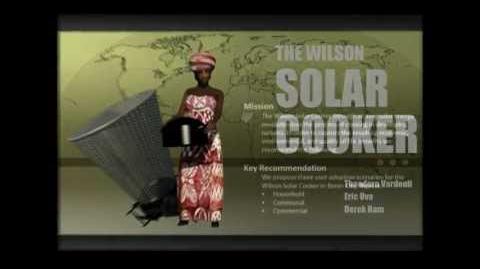