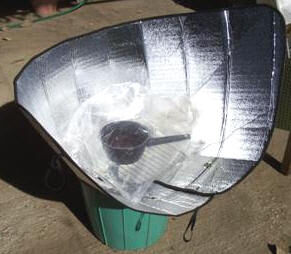 Kathy Dahl-Bredine developed the Windshield Shade Solar Cooker while experimenting with various designs of cookers to introduce in the indigenous communities where Kathy lives and works in southern Mexico. She hit upon an utterly simple way to make an instant portable solar oven by using an automobile windshield shade.

(Note that the windshield shade can be attached to itself by means other than Velcro.)

Kathy Dahl-Bredine writes: "I have found this totally simple solar oven extremely practical, as it is so lightweight and easy to carry along anywhere. But in addition, it has reached a higher temperature in a shorter time than all the other models I have experimented with so far (I haven’t used a parabolic) — a little above 177 °C (351 °F). I have cooked black beans in about the same amount of time as on a gas stove; I’ve used it to bake breads, granola, brownies, lasagna, all sorts of vegetables, and to purify water. The sunshade may not be available everywhere, but I suspect it can be found in most urban areas, since I found it here in southern Mexico. The Velcro was also available in fabric stores. The cost of the sunshade was about USD 3.00; the Velcro about 25 cents."

It is clear that the windshield-style cooker is somewhat flimsy in any sort of windy conditions. One approach is to tie a horizontal support brace across the front of the cooker. This is often done with something like an untwisted metal coat hanger. A perimeter wire can also be used, held with stationary clips, as seen in the adjoining photo.

Sharon Cousins has come up with a super-size version made from a windshield shade cover sized for a large pickup truck or sport utility vehicle (SUV). The larger size requires something on the order of a tub instead of a bucket for support. The 48 cm (18.9 in) round grate from a broken fan helps hold the windshield shade in the tub and helps maintain the shape. Pots rest on a flat grate laid across the edges of the round grate, which lets a lot of light get under the food.

This cooker is vulnerable to wind, so put some weight (such as a large rock or two or three) in the tub, and if it is very windy you can also put a few foiled rocks on the grates to help hold it all down. This super-size version can handle up to two gallons of food or up to ten pounds of meat in decent sun. In really good sun, it has gotten a full two-gallon water boiler hot enough for dishwashing (too hot to put a bare hand in) in less than an hour. This cooker gets almost hot enough to sauté and will get smaller amounts of food very hot, very quickly. In one soup stock cooking adventure at the height of summer 2007, a one liter (0.3 gal.) cooking jar stuffed with the bones and skin of a roast chicken, some seasonings, and water with a little wine to fill was set to cook on a glass plate under a glass cover. The contents reached a good boil and fat from the top began boiling over and out of the jar, where it not only continued to boil and bubble on the glass plate under the cover, but also bubbled on the plate outside of the glass cover where it was seeping under the edge! NOTE: The double-grate system will work with a smaller shade, too — usually around 33 cm (13 in) to 36 cm (14.2 in) in diameter is about right for the broken fan grate. (Broken fans are not hard to come by, at least in the developed world.) Double-grating probably gives more benefits to those suncooking in the north than it would closer to the equator, though even close to the equator it will help to cook with early and late sun. 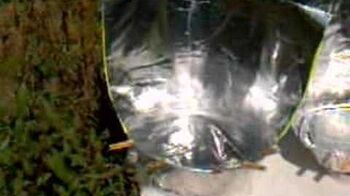 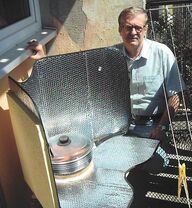 The UltraLightCooker uses foam panels for support and was designed by Andrew Kotowski. He built this cooker specifically for his trip to Poland. The objective was to build a simple cooker: collapsible, light, cheap, and easy to carry. It is useful for demonstrations and to cook simple meals.

See more information on this variation on the French Wiki - (English version). 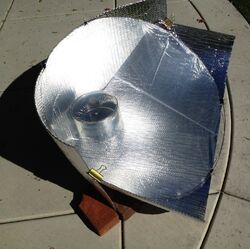 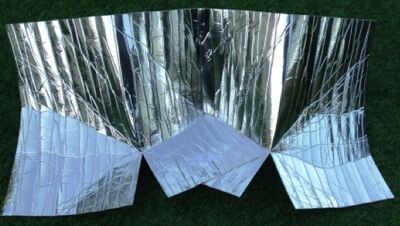 Sharon Cousins built this powerful cooker from an old kettle grill. The addition of a windshield shade reflector at the back makes it a very strong cooker. On its maiden flight, temperatures in the cast-iron fry pan under the glass lid reached 107 °C (225 °F) by 8:30 a.m., 121 °C (250 °F) by 8:45 a.m., and by midafternoon it was running just shy of 163 °C (325 °F). The tilt angle of the reflector can be adjusted to keep the hot spot over the pan. This is a very good cooker for demos, as it can turn out a hot quesadilla or pan of nachos in under ten minutes (slip black plates or shallow pans of nachos into the pre-heated cast-iron fry pan — use an upside down Pyrex pie pan or bowl for a lid if your glass lid is too shallow for a pile of nachos).

A disposable aluminum pie pan is used to close the hole in the bottom of the kettle, and the rest of the kettle is lined with heavy-duty aluminum foil. The fry pan rests on the grill that formerly held the charcoal and is covered with a glass lid from a thrift shop. The top of this kettle is covered with a 61 cm (24 in) x 76 cm (29.9 in) oven bag, available from restaurant supply stores that carry specialty bags such as the Webstaurant Store. It is laid flat, so it is actually a double cover, and held on with binder clips. As shown, the cast-iron pan with glass lid gets very hot, but the ambient air temperature in the kettle is not tremendously hot, so any clear plastic might be worth a try if you do not have access to an extra-large oven bag; or you could cut open two turkey-size bags to get large flat pieces and cross them over the opening, which might work depending on the size of your kettle. Sturdy spring clamps are used to secure the windshield shade and adjust the angle. If you still have the metal cover to your kettle grill and you are in the time of year when you use your kettle cooker almost daily, you can cover your cooker (at least if you used small binder clips, which do not interfere) and leave it out without having to end up with dew residue and excess dust clouding your cooker top. In the morning, just take off the cover, clip on the booster, and let your pan start heating. To perform well, the cast iron must be preheated, so if you're going to use it, the sooner you start it heating the better.

Part of what makes this arrangement so hot is the thermal mass of the cast iron. One attempt to bake bread in it indicates that lighter pans would need to be oven-bagged or otherwise "greenhoused," in addition to the clear cover on top of the kettle. Sharon believes that this cooker will cook in alternative pans, but only with an additional greenhouse around the pan. This is a case where cast iron gives vastly superior performance, but only if it is well preheated.

Sharon has since switched to the poster-board reflector panels (See Aluminum Roasting Pan Solar Cooker and click on the project sheet link for information on making these powerful reflectors) and is reaching temperatures up to 204 °C (399 °F) in the glass-lidded fry pan. This has turned into a terrific cooker for quesadillas, among other things. Sharon is planning to give this cooker its own wiki page as soon as she can make a little more time for it. This jury-rig or makeshift cooker is really a prototype for something that could be groundbreaking, and Sharon would welcome contact and feedback from other solar cooking engineers and innovators on how to maximize its potential.

Stacy Ryerson has made a cooker using a material similar to the windshield screens. It is a quilted insulating plastic covered with Mylar (sold on a roll and intended for wrapping heat ducts). However, it differs from the typical windshield screen because it is designed to bend in only one direction. This means it appears to stand vertically on its own without support, except for lateral wind bracing. The windshield screen must bend in two directions to conform with the complex shape of the glass. This allows it to form a funnel shape cooker, but the cooker usually requires additional support aids. This cooker is sturdy and is able to pack flat for transport. The back cardboard panel is shingled with strips of duct tape to make it waterproof.

Solar Cooker at Cantina West offers another inexpensive design possibility using reflective HVAC insulation. The Reflectix bubble insulation can be purchased in a roll (7.5 m x 0.5 m, or 25 ft x 2 ft), allowing you to make several reflective panels; or you can buy a pre-cut length in some home improvement stores. This particular reflector panel is a 1 m x 1.5 m (3 ft x 2 ft) panel. The flat sheet first has a tab cut at the base, which is folded up. The adjacent bottom tabs then fold underneath. The tabs can be secured with various clips available at office supply stores. The edges of the cooker can be covered with reflective tape. A dark-colored pot enclosed in an oven roasting plastic bag sets in the center for cooking. For better heating, it is best to raise the pot up off the reflector with a trivet or small stones or sticks. See more detailed instructions...