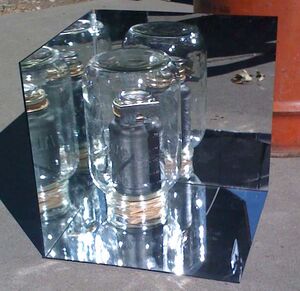 The Winebox Solar Rice Cooker is an excellent and inexpensive panel cooker. The cost of the original was about 20 cents worth of black paint and tape. It will cook 20 ounces of rice in under two hours, with no assistance or looking after. If you want hot rice or veggies at 6 o'clock, set the unit in the sun by about 3, and it'll be hot and cooked when you get back. Two of these units could cook 40 ounces of food, and with 4 of them you could have a solar 4 course meal. In addition, this cooker is able to disinfect 20 ounces of water at a time, since it has reached temperatures in excess of 230° F, and it only takes about 170° F to kill most bacteria. It may also be possible to cook a small batch of bread, but this has not yet been tried.

The winebox has since been modified into the square foot solar cooker (Ft2), which is now made with those paste-up square foot mirrors you can buy at the hardware store. The reflectivity is better, and unlike foiled cardboard, they are water resistant. One negative aspect with this new cooker is that the mirrors can break, and the edges are pretty dangerous sticking out there. It is recommended that you put a wood backing on them, or a wooden or plastic frame around the mirrors. It'll run you less than six dollars for the mirrors, and the unit should last a lifetime if it is cared for.

The Ft3 Solar Cooker (Solar Cube) is a variation of the Ft2 Winebox Solar Rice Cooker. It is comprised of two Ft2 cookers arranged together to form a cube. This allows the unit to be fastened and carried by the user. 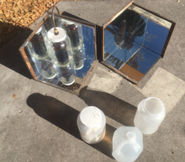 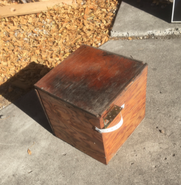 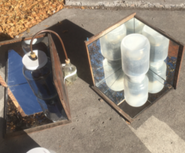