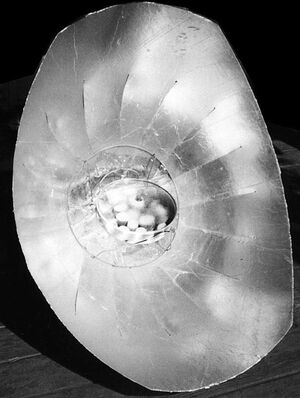 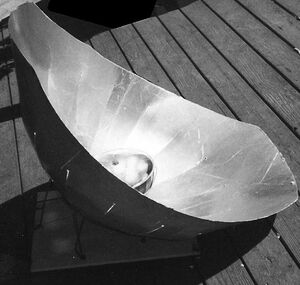 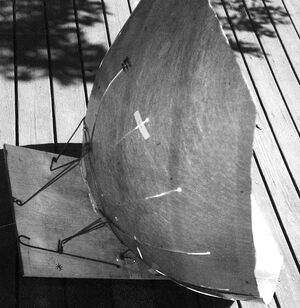 The Zhu Parabolic Cooker was designed by Li-Yan Zhu. Dr. Zhu has focused his efforts on developing a parabolic solar cooker that can be used for unattended cooking. In 2003, his intention was to incorporate aspects of a parabolic solar cooker and a solar box cooker into one design. He perceived one difficulty with using parabolic cookers included the constant realignment of the reflector with the sun. Hence, many designs rely on some type of automatic tracking system. The other issue was the high temperature that parabolic cookers achieve. This can also be seen as a positive aspect, because food can be cooked quickly, food can be fried, and they work well for bringing water up to boiling in a sort amount of time. But parabolic cookers usually need to be monitored during cooking, because there is a risk of burning the food.

He also liked the box cooker approach, which cooks food at a lower temperature, and does not require many realignments during the cooking period due to it's less focused reflector.

He proposes an ellipsoidal shape reflector, that can be set at an angle to catch the sun for a longer period of time between adjustments. The shape catches the sun's curved path in the sky. The elliptical shape redirects less focused light on the cooker resulting in lower cooking temperatures.

During cooking, Zhu suggests pre-leading the sun by one hour, then the cooker should not need to be realigned for a two hour cooking period. The suggested cooking pot has a clear top, and rests on two curved support brackets, which will allow the pot to remain level in many different reflector positions. Interestingly, many of the desired aspects of this cooker are achieved with a more conventional solar panel cooker, which usually has a reflector that can be collapsed for transport and storage. The Zhu cooker can not be collapsed in this manner.

Retrieved from "https://solarcooking.fandom.com/wiki/Zhu_Parabolic_Cooker?oldid=119815"
Community content is available under CC-BY-SA unless otherwise noted.